It was 1980 when I first had to learn hydroponics, a word that literally means “water works”.

During this time, it became impossible to grow greenhouse vegetables in Alberta soils. The root-knot nematode affected cucumber production to such an extent that the economic viability of the industry was threatened. There were two common methods used to disinfect the floor: steaming and using chemicals like Basamid. None of them worked because the nematodes had “learned” to wander around the greenhouse poles or into nooks and crannies before returning to the plants and infecting them again.

Our team, located in what was then called the Alberta Horticulture and Special Crops Research Center in Brooks, Alberta, began researching different growing media and hydroponic methods for growing cucumbers, tomatoes and peppers. Between 1980 and 1984 we tested straw bales, peat cushion bags, sawdust and nutrient film techniques (NFT). We have designed nutrient delivery methods, held several open days for growers to see the trials, and prepared how-to manuals and publications. By 1984 almost all vegetable growers had switched to soilless cultivation techniques and the industry rebounded to regain an economically viable position.

It was also during this time that I became aware of Dr. Allen Cooper’s research work on the nutrient film technique. A group of tomato growers in southern Alberta invested in NFT facilities and successfully grew tomato crops. Unfortunately, many problems have arisen in NFT-grown tomatoes, such as the need to control Pythium and nutrient management in recirculating solutions. Cucumbers grew very well for 100 days, but then stopped due to the development of massive root systems. The root mats were so thick that they began to age and affect upper plant growth. The pursuit of an NFT hydroponic system was abandoned.

After experimenting with different mediums, there was a transition period where commercial producers tried the different options. Many growers in Alberta switched to rockwool, but coir began to appear in the early 2000s and many began using it as their main growing medium instead. Lately, stone wool has again gained ground. Growers will continue to change their growing media based on cost, ease of handling, disposal, and other considerations.

hydroponics
Soilless cultivation by hydroponics is the most commonly used technique in the world. This includes growing in sand, peat moss, rice husks, gravel, and other locally available growing media. The use of coconut fiber has grown considerably now. There are also variations of the hydroponic system, such as polystyrene floating panels with plants, nutrient film techniques, deep flow channels and other similar techniques.

Nutrients are delivered via drip irrigation through injectors, and leached water is discharged to waste or recycled. Note that hydroponics is just another method of production and when it was released the benefits were often compared to soil production. The touted benefits of using hydroponics, such as less water use, less disease pressure, and higher quality harvest, all need to be understood in proper context and with relevant comparisons. I remember how growers in Alberta took four years to successfully transition from soil to hydroponic systems, and only after gaining a thorough understanding of nutrient delivery and crop management from demonstrations open houses and technical manuals.

A crop of tomatoes grown in coco bags must always be well managed in order to produce large yields.

Aquaponics
I had the pleasure of working with Dr. Nick Savidov when he was researching aquaponic systems at the Crop Diversification Center South in Brooks, Alberta. and thus learned to grow fish and plants together.

Simply put, this system incorporates fish raised in water tanks, and the waste they produce is biofiltered and passed through the root zone of the plants. The plants absorb the nutrients they need, the water is returned to the aquarium and this cycle continues.

This system can continue to recirculate so that very little additional nutrients are needed. Some nutrients may need to be added depending on crop needs and performance. Fish food is also added regularly.

Research shows that once the microbial population of the aquaponics system has fully grown to turn fish waste into plant food, this method can dramatically increase crop productivity. Greater crop productivity combined with additional income from fish sales can improve the economics of greenhouse investments in colder climates as well as the financial resilience of greenhouse operators. However, many producers do not want to bear the added burden of marketing fish.

I find that the nutrients involved in aquaponics are far lower than what we provide in hydroponic systems. For this reason, plants must produce massive root systems to absorb smaller amounts of these nutrients.

Under the Safe Food for Canadians Regulations, products grown in aquaponics can now be legally labeled as organic if they are certified by an approved certification body in accordance with the organic aquaculture standard. According to the CFIA, producers are encouraged to provide voluntary information about the standard to which the product has been certified. 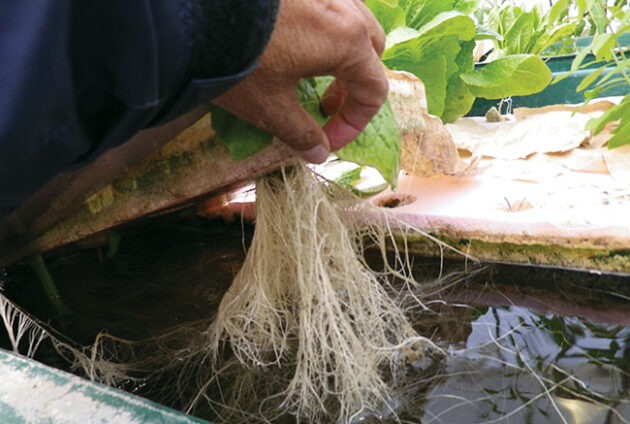 Lettuce in a model aquaponics system with 15 tilapias. In this system, the fish were reared directly in the pond and the water was oxygenated.

Aeroponics
Aeroponics is a type of hydroponic system in which water containing dissolved nutrients is sprayed at the base of plants. Proponents claim that the benefit lies in the availability of oxygen directly at the root level. The image above is of an A-frame setup. A massive plumbing system of nozzles used to fertilize the crop can be seen. Here, the lettuce produced aeroponically was comparable in yield and quality to that produced in a floating hydroponic system. 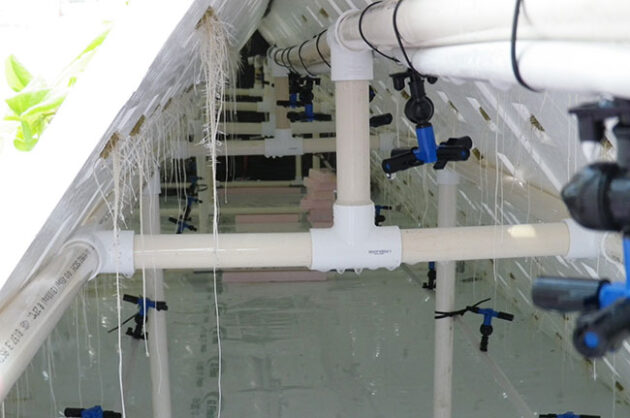 Is one system better than the other?

Here I have given a historical perspective on the development of hydroponic systems in Alberta. The main reason for this change was that production in the ground had become impossible due to disease pressure. Soilless cultivation then offered producers an alternative. Even in other parts of the world, one can see where the use of hydroponic systems has enabled cultivation where it is not possible to do so in soil.

The bottom line is that hydroponic systems have developed benchmark yield data and any new system should now achieve comparable or better yields. On an annual basis, for example, regular long English cucumbers yield over 200 pcs/m2mini cucumbers give more than 70 kg/m2tomatoes over 60 kg/m2and peppers over 30 kg/m2. For leafy vegetables like lettuce, benchmark yields are around 50 kg/m2 per year.

Ultimately, be sure to choose a system that best suits your needs, leverages the expertise available to manage the production system, and meets market requirements. There has been an increasing emphasis on sustainability, zero carbon footprint and, of course, costs and benefits.

Mohyuddin Mirza, Ph.D., is an industry consultant in Alberta. He can be contacted at drmirzaconsultants@gmail.com